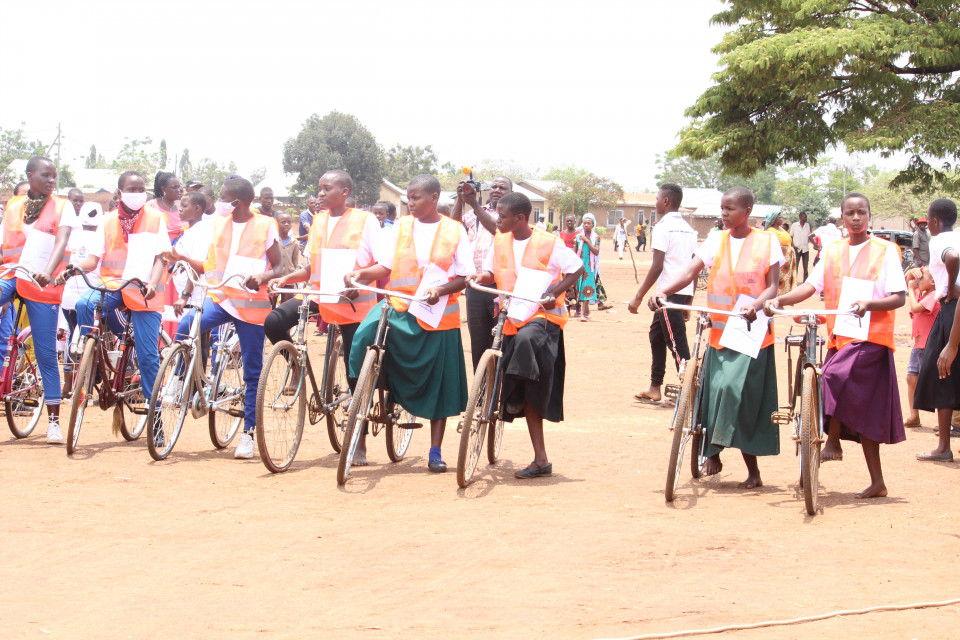 The event was held on 11th October 2020 at Segese ground Msalala district Shinyanga.

International day of girl child is celebrated annually on 11th October every year to recognize girls’ rights and the unique challenges girls face around the world. This year C-Sema had an opportunity to commemorate the day in a rural district of Msalala in Shinyanga region.

The commemorations are part of the three years’ #GenderEquality programme financed by Korean International Cooperation Agency (KOICA). The overall programme goal is to strengthen social and economic resilience of some of the furthest-left-behind rural women and adolescent girls in Msalala District, Shinyanga. The day of the girl child therefore sits well with programme’s goal.

The event was preceded with pre-event activities focusing on community awareness on gender-based-violence, gender equality; and most importantly, girl child rights and how it is important to understand and embrace them, for the realisation of holistic and inclusive community affluence. In essence, the activities included 7 radio dialogue programs with Kahama FM and HUHESO FM where 15 radio jingle spots were aired; several road shows cruising along Msalala district villages; etc.

On estimates (based on the two radio listenership data), these campaigns reached about 7.5 million people in the rural areas of the five regions of Shinyanga, Simiyu, Tabora, Kigoma, Mwanza, Kagera and Geita and in a total of 17 districts of Kahama, Shinyanga Rural, Bukombe, Chato, Uyui, Tabora Rural, Misungwi, Kaliua, Urambo, Nzega, Geita, Mbogwe, Nyang’hwale, Kibondo, Igunga, Sengerema and parts of Biharamulo.

The press conference was held at Submarine Hotel where all #GenderEquality programme’s implementing partners in Msalala were present. In particular, Msalala Local Government Authority (LGA) officials, KIWOHEDE, UNFPA, journalist from different media houses and ourselves (C-Sema). The event’s guest of honour, former Miss World Africa, Ms Nancy Sumari was the key speaker during the pre-event’s press conference. She called for zero tolerance on gender-based-violence and urged parents in the community to take girls to school. Growing as a Maasai girl, Nancy recalls how her dad was keen to ensure that all her daughters got quality education – it is for that reason that she is an icon in the continent.

Slightly 500 girls across different villages in Msalala attended the event where the girls bicycle tournament was the biggest crowd drawer. Wearing the National Child Helpline number 116 wrest-band, 116 branded reflectors and 116 branded t-shirts the girls were spot on, athletic and competitive. For all was at stake, the winner would have a brand new bicycle to take home. Therefore, this was not just a tournament – girls wanted to make history by delivering to their family, a bicycle and earn respect!

So here is how the competition was conducted. About 100 girls showed with their own bicycles for the competition and these were divided into four groups of 25 girls each. Each group provided 5 winners who entered the tournament’s final. The 25 girls then competed for the final trophy and only top 10 winners made it to the main stage for the award ceremony.

Just after the tournament and before the guest of honour could present the awards, our Board Chair Ambassador Nyasugara Kadege took a moment to speak with the girls, in their local language about how  important it is to believe in themselves and how only that could change their dreams despite the environment and situation they are  in. “Everything is possible only if you believe in it. Its possible to have a goal to become successful despite growing up here at Ntobo, it is possible to finish your secondary education, all you need to do is believe and have the desire to achieve”.

All 10 winners had their pricey awards including solar lanterns, some cash and girly-sanitary-supplies. The size of the package was similar with exceptional to cash which was dependent on the position of the girl on the top-10’s-list. The overall winner drove home her bicycle just as it was organised.

The closing remarks was given by our Chief Executive, Kiiya JK, who extended his gratitude to all who dedicated their time to be part of the event, from the girls to the LGA Officials, community members, the media, the UNFPA team and C-Sema and making the whole experience special and memorable.

He acknowledged and appreciated the girls who were bold enough to share their life and educational experiences which are dreadful to them. Some of these experiences includes but not limited to girls being forced to drop out of school, married off early especially after being dropouts, and sometimes the force into married life is due to the fear of the parents that being a girl is a recipe for disaster hence before a girl child puts them to shame they marry her off to protect their reputation.

Being born in a culture that if a girl is not seen nor approached by a man then something is wrong with the girl child is another issue that presses the girls of Msalala. Hence girls that have not been seen are subjected to a cleanse (ritual bath) that will cleanse the girl child of all the curses of not being seen and seduced by a man. These ritual baths have led to many girls being pregnant at a young age and fail to finish their education.

Some mentioned based on their culture if at a young and tender age a girl child has not been seen by or being seduced by men it seems that there is a problem with that child, so local elders prepared special ritual bath that the girl has to go along so as to attract men in her life, of which they believe it also the causes of many young girls not to finish their education due to child pregnancies.

The girls in their contribution called out for action and insisted that the ongoing efforts should be a continuous process, and not wait for special days instead make everyday special, for they believe their safety will be guaranteed if the community see them as human beings worthy of respect and love and not a source of income or a tool for pleasure.